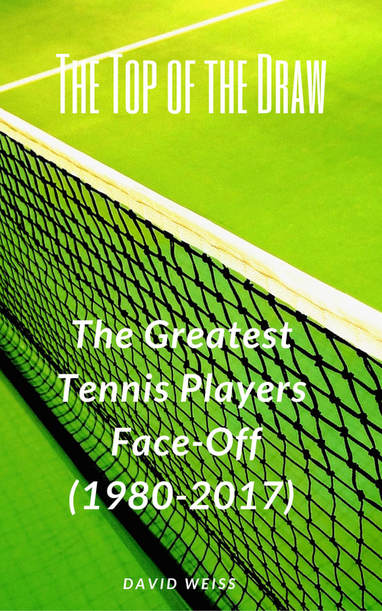 
Have you ever wondered what would happen if Yannick Noah and Jo Wilfred Tsonga would play one another in their prime? What about Boris Becker vs John Isner? Would Amos Mansdorf be able to make any headway against Roger Federer? Would Michael Chang be able to fend off the big forehand and powerful serve of Paradorn Srichipan? While we’ll never know for sure how these players would do against one another in their prime, this book offers some clues. Fantasy sports, cross-generational match-ups and all kinds of “what if” scenarios in seem to have captured the imagination of sports fans. In this book I imagine “what if” this tournament could actually could happen. How would things play out?
I have always been a huge tennis fan. Watching, reading about and thinking about the greatest game on earth has always been my passion. While I love almost every tennis book that I have read, I just don’t think there’s enough out there. Tennis fans will find this book thought provoking and fun. It’s not a Bud Collins, John Feinstein or Frank Deford classic, but I’m sure that it will get you thinking and be a great way to keep tennis at the forefront of your thoughts.
I am sure that readers will disagree with who wins and loses certain matches as well as other things like seedings. For this reason, there is a “comments” section at www.ExpertPromotions.org where people can debate and discuss. This book is the top half of the 128-man draw. One man will emerge to play the winner of the bottom half of the draw. Each match is analyzed and explanations are given for who wins and why. Before each first round match there is a brief biography of each player. Their prime year is in bold somewhere in their bio. These ‘fantasy matches’ take place on a hard court and both players are plucked right out of their prime.
This book pits players from 1980-2017. In some cases, these players did play one another during their career, but their prime was, of course, not exactly at the same time. It’s always fun to think about seeing players during their absolute peak. Often times a player’s coming-out-party is their prime. With players such as Becker, Chang and Sampras, I use their initial grand slam win as their prime. While they may have gotten better and added new wrinkles to their game, there’s nothing like that initial, unbridled sharpness when a player first bursts on to the scene.
I used just Wikipedia (and I donated to them, what an amazing resource) and YouTube. And let me tell you, I used A LOT of YouTube! I am sure that I forgot to include certain players who were in the top 128 and I know I threw in a few wildcard players, but I did the best I could with this fun/challenging task. In these cases (wildcard-like players) I decided that some players have great entertainment value or I have good memories of them. While Max Mirnyi wasn’t really a top singles player, he was amusing. Omar Camporese was included because he’s simply a personal favorite.
So while this book isn’t meant to be the greatest piece of tennis literature of all-time, those who have previewed it have found it thought-provoking, insightful and a topic that needs to be explored. It is priced at the bottom of what Kindle allows based on the number of words and other factors in their formula. Why? Because it is meant to be affordable and fun for the reader. I want as many people as possible to read this and to comment at the website. The bottom half of the draw will be available in September of 2017, two months from the date of the release of this book. Enjoy!
First Round Matches
#1 Roger Federer vs Amos Mansdorf
Ronald Agenor vs Jonas Bjorkman
#3 Pete Sampras vs Ramesh Krishnan
Paul Annacone vs James Blake
#5 Boris Becker vs John Isner
David Wheaton vs Alex Corretja
#7 Stefan Edberg vs Byron Black
Nikolay Davydenko vs Albert Costa
#9 Novak Djokovic vs Kent Carlson
Paul Haarhuis vs David Ferrer
#11 Andre Agassi vs Omar Camporese
Alberto Berasetegui vs Jan Siemerink
#13 Sergi Brugera vs Feliciano Lopez
Ivan Lubijic vs Tim Mayotte
#15 Jim Courier vs Taylor Dent
Jason Stoltenberg vs Paradorn Srichipan
#18 Peter Korda vs Brad Gilbert
Tommy Haas vs Michael Chang
#20 Lleyton Hewitt vs Slobodan Zivijionovic
Jimmy Arias vs Marcos Baghdatis
#22 Andy Murray vs Kevin Curren
Sebastian Grosjean vs MaliVai Washington
#24 Andy Roddick vs Mark Woodforde
Max Mirnyi vs Anders Jarryd
#26 Marat Safin vs Johan Kriek
Nicolas Lapenti vs Fabrice Santoro
#28 Greg Rusedski vs Jeff Tarango
Andrei Chesnokov vs Thomas Berdych
#30 Yannick Noah vs Jo Wilfred Tsonga
Hicham Arazi vs Nikolas Kiefer
#32 Thomas Muster vs Emilio Sanchez
Marc Rosset vs Paul Henri Mathieu

"Amos Mansdorf would not have won that many games vs Federer. But I am glad that someone else saw the greatness in Srichipan and Roddick. Granted, Srichipan didn't win much but he had a huge game"
--Brad
Grand Rapids, MI 8/2

"Agassi vs Becker was pretty accurate but I would have had the match go the other way in the end. I agree that players have their prime earlier than what most people identify it as. Rusedski gets too much credit in this book, Courier not enough."
--Alex
Holyoke, MA 8/4

"Rusedski was tough as nails. I wouldn't have even included Kent Carlson since he never played hard courts. Edberg would would have been a beast against modern players with his serve-and-volley game, so kudos for recognizing that. I was rooting for Baghdatis even as I was reading."
--Jamie
​Ogden, UT 8/5

"Rusedski vs Tarango, interesting match-up of whackos! I was surprised to read how little Tarango accomplished in his career. He was tough but lost a lot".
--John
Boston, MA 8/22

"I like the general theme of Andy Roddick being under-appreciated. Even though he didn't have a long stay at #1, he was a great player who did win the ultimate prizes in tennis of Grand Slams and making #1"
--Brent
Vancouver, Canada 8/30

"Brugera vs Lopez intigued me the most. I agree with all of the analysis on the match but not the outcome. Wish we could see this battle of Spaniards with both guys in their prime".
--Jon,
Evanston, IL  9/4

"I liked reading about the contrasting style players but also the Haarhuis vs Ferrer type matches where they played similar but one guy was just simply better. Safin vs Kriek actually would be the match I would most want to see of any of these. Both were enigma players. Still not sure anyone has ever been better than Safin. Crazy trivia that Kriek won 2 Slams".

"Really love this book! Well-written and awesome concept. Kept me fascinated on the place from Seattle to Phoenix. I have company in loving Santoro and Mirnyi and glad to see them included."

"Enjoyed this a ton. It made getting Kindle Unlimited worth it. Waiting for the bottom of the draw. I sure would have been one of those people you described cheering for Baghdatis vs Arias. Some of these guys had more accomplishments than I remember, Arias included but also Curren, Muster and Hewitt."

"Love this book! Modern players are so well versed they would have handled Sampras one-dimensional game better than you think"
--Adam
New York, NY  10/13

"Some guys like Paul Annacone couldn't even rally from the baseline at all. I think the game has evolved and they'd be knocked out early. I do think that guys like Tomas Muster would have passed the test of time though. Ultimately I like the conclusion and the final eight you have on this side of the draw".
--Jamie
Pensacola, FL  12/2

"I am glad that this wasn't necessarily the top guys. Glad you pointed out your Omar Camporese bias. I see that we all have a Fabrice Santoro bias. Some players like Courier and Chang don't wear well with people's memories but I think they would have been even more successful now than they were back then. I think the author did a nice job showing this and kept in balance the eras.
--Stan
​Sturgeon Bay, WI 12/8

"If you watch the champions tour you can see how incredibly well guys like Cash, Philopoussis and Courier hit the ball even in retirement. In their prime they would have been near Nadal and Federer level.
--Steven
Hollywood, FL  2/5/2018

"Glad you included Omar Camporese. His results won't blow anyone away but youtube shows his consistency. He would match up well in today's game"?
--Glenn
Peshtigo, WI  9/14/2018

"Where would Joakim Johannsen rank? His serve was remarkable but injury never allowed him to reach his peak.
--Ben
Fort Lauderdale, FL 10/2/2018

"How can you say that Wilander and Lendl would match up at all against the stars of today? No serve and nothing to truly defeat the top 10 of today with.
--Marky
​Boynton Beach, FL  10/12/2018
Powered by

Create your own unique website with customizable templates.
UA-39271370-1